Collaborating with local communities to set NBS goals and priorities

Did you miss the second edition of the UrbanByNature South Eastern Europe webinar series? Let’s briefly recap what happened:

The #2 UrbanByNature South Eastern Europe webinar addressed step 3 of the UbN programme, PRIORITIZE, which consists in collaborating with local residents and stakeholders for joint goal setting and prioritization of nature-based solutions that suit the local context. The session was facilitated by Ana Mitić-Radulović, President of the Management Board at Centre for Experiments in Urban Studies - CEUS.

Representing the CLEVER Cities project, Sean Bradley, Programme Manager at  Groundwork London, gave the first intervention of the day with a reflection on how to prioritize community goals. Sean presented different forms of engaging the community and its relevance, starting with deep engagement where few people, acting as community leaders, are intensively occupied within the process and are taking the lead on decision-making. Based on the context, a wider engagement, where the whole community is involved in the projects, can have its advantages. The best option is to find a balance between both approaches according to the project’s priorities.

Sean also provided insights on what should be considered when prioritizing the community goals, on the importance of assessing a variety of options before a decision is made, and on respecting the relationship between the parties. For that, Sean explained all the steps to be taken before prioritizing, such as the necessity of defining goals as a key aspect of connecting people through participation. According to him, “Goals work as an energy and motivational tool”. He then introduced different prioritization tools such as forums, votes and surveys, and later reflected on their use in the South Thamesmead community, where rather deep engagement was practiced during the Covid-19 pandemic.

The anticipation of outcomes is also an important part of the process as it describes a future scenario based on established goals. Finally, Sean announced that Task Force 6, an initiative that gathers a number of Horizon 2020 projects, has created an Online Decision Support tool to assist in the decision-making process when developing projects. 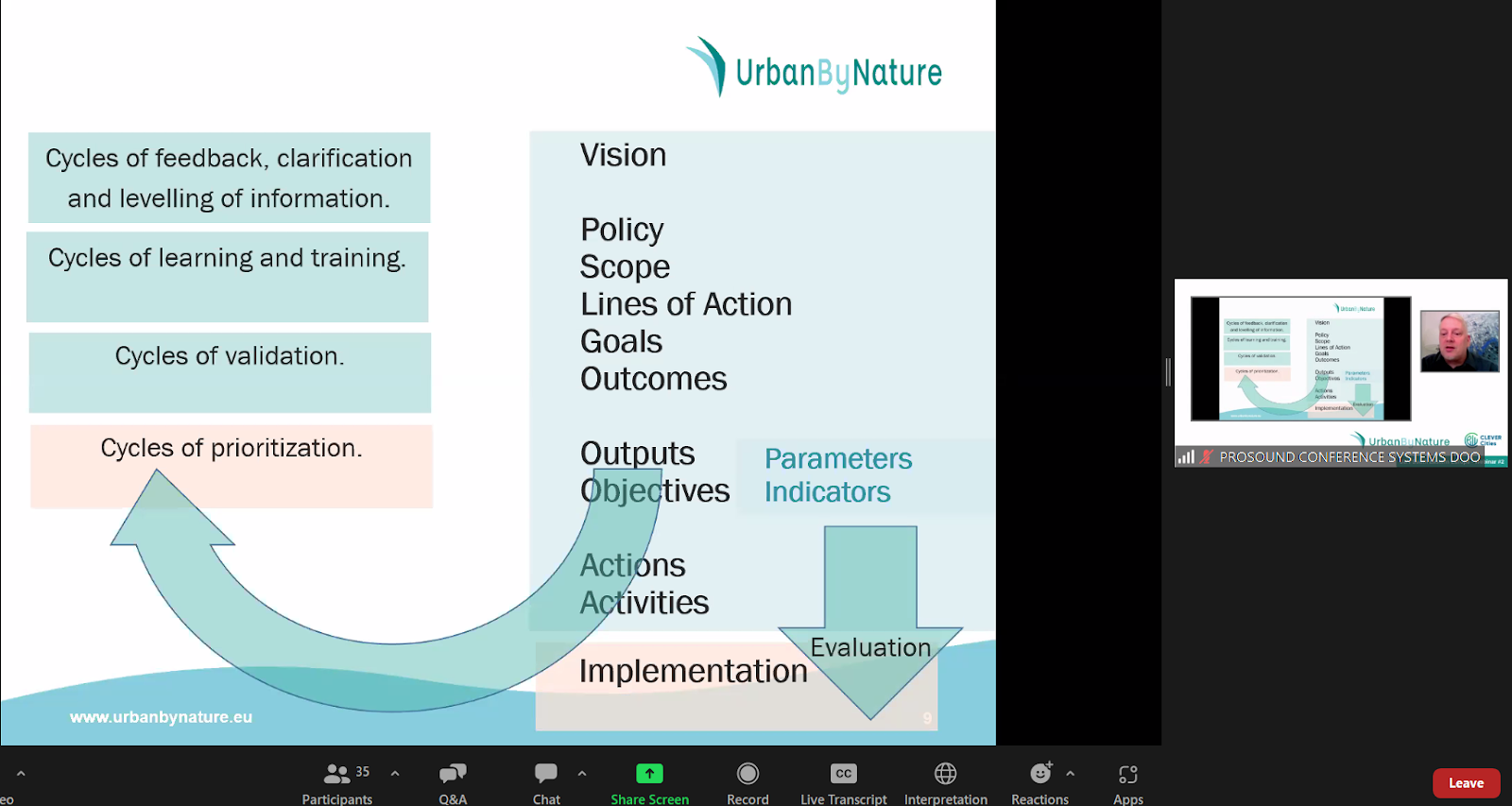 In the second intervention of the day, Barbara Goličnik Marušić,Head of Research from the Urban Planning Institute of the Republic of Slovenia (UIRS), focused on the potential of NBS (nature-based solutions) as an urban planning tool.

She presented a matrix for classification of NBS, developed by UIRS for the Ministry of Environment in Slovenia, to address the role of natural processes in NBS and their ability to deliver results. The final purpose of such methodology is to show which concrete solution best solves each problem in the urban environment. Besides, the audience was able to reflect on the challenges to implement NBS in different urban patterns.

Barbara also explained the importance of analyzing side characteristics in the approach of NBS and how a site’s natural process dynamics and other dynamic patterns can define the placement of NBS solutions. She also provided insights on working with urban design and upgrading it and on the importance of mapping. Maps related to urban planning provide the opportunity to represent areas of land in a new manner and can thus create awareness about other dynamics such as social aspects.

In the discussion session, the audience had the chance to ask questions and heard from the panelists about their experience on the ground. Barbara shared her experience on how to create feedback loops across different communities with similar/same projects. In her opinion, it is important for local engagement to communicate about the project through brochures in the native language and to have a strong presence in the local media.  Sean contributed to the discussion on collaborative decision-making processes, stating that the local context defines the dynamics. In the case of London, the institutional structure allows an horizontal approach in which the local government delegated power to a certain department that was tasked to include community groups, guaranteeing such collaboration.

The webinar recording is available on the CitiesWithNature Youtube Channel. For more information on upcoming events and to receive our monthly UrbanByNature Digest, we encourage you to fill out the UrbanByNature registration form.

The next UrbanByNature South Eastern Europe webinar will take place on 18 October. The session will explore step 4 / COMMIT & PLAN of the UrbanByNature methodology, with a special focus on the hot topic of Urban Greening Plans (UGPs) - stay tuned and thank you for joining us!